Get fresh music recommendations delivered to your inbox every Friday.
We've updated our Terms of Use. You can review the changes here.

IT TAKES A MAJOR LABEL TO HOLD US BACK 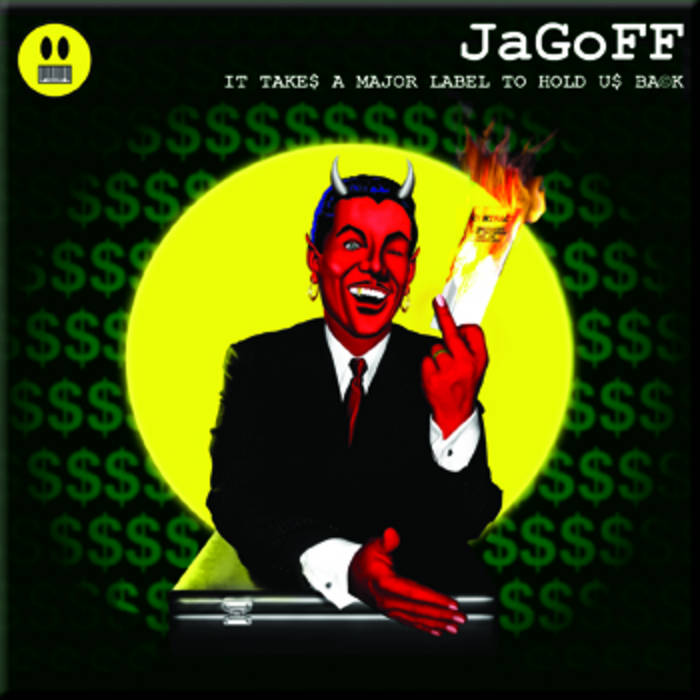 Nonentity Every single album is a funk lover's gritty wet dream. Favorite track: NEVER MET A GIRL LIKE YOU.

There's a revolution coming to a town near you and the soundtrack is JaGoFF. You'll need some big-azz bazooka tubes in the trunk aimed straight at the Musical Industrial Complex to properly tear this up, because the FUNK is BACK, and it's ready to roll, motherf*ckers!

JaGoFF's funk classic anti-record industry manifesto, It Takes a Major Label to Hold Us Back, was originally released in 2011 and quickly went viral to the tune of 8.75 million+ downloads on BitTorrent, during the course of Buy Nothing Day weekend (the international day of protest against conspicuous consumption).

JaGoFF Releases Free Music for Buy Nothing Day
by BitTorrent on November 25, 2011

In support of Buy Nothing Day and #Occupyxmas, Chicago media artists JaGoFF have released a massive compilation of 51 tracks free to the BitTorrent community, including a full album with the accompanying instrumentals and acapella mixes (for the BT community to remix) in addition to three album covers. Download it today here!

Artists have long used music to raise awareness of and advocate social and political causes. BitTorrent’s technology and expansive community provide a new platform for artists looking to share their music with the world.

This is JaGoFF’s second release via BitTorrent. The first, “The Chicago Promoters’ Ordinance Kills Independent Music”, is a compelling and humorous documentary chronicling a grassroots campaign to preserve the rights for independent artists to promote live shows in Chicago. The documentary, available for download here, raises awareness around laws that effect local arts and music communities. To connect with JaGoFF, please visit them on Facebook at www.facebook.com/jagoffpublishing/

JaGoFF is: Sir Real & MOFO
All songs written, recorded and produced by JaGoFF
Hammond B3 on (# 4) "It Takes a Major Label to Hold Us Back" and Bass & Hammond B3 on (# 8) "Brother from Another Mother" performed by Domino Rosi
Sex-licious guest vocals on (#9) "Fake ID" performed by K-Fresh
Party scene on "Brother From Another Mother" courtesy of The Trailer Park Players and a few of our closest friends
Album Mixed down by JaGoFF & Jason Donnelly @ Peace Love Productions / Chicago
Mastering by: Blaise Barton @ Joy Ride Studios / Chicago
All music, video & artwork © 2010 JaGoFF Publishing

100% DIY or DIE. NO THANKS to a record label.
Download it. Burn it. Share it.
SUPPORT INDEPENDENT MUSIC OR BE FORCE FED CRAP!
MADE IN CHICAGO, USA.

Spawned from post-industrial Detroit and Chicago's South Side, JaGoFF are fierce independent artist advocates, community organizers, social/political satirists, pranksters, hell-raisers, and all things FUNK. You'll need some big-azz bazooka tubes in the trunk aimed straight at the Musical Industrial Complex to properly tear this up. ... more