Get fresh music recommendations delivered to your inbox every Friday.
We've updated our Terms of Use. You can review the changes here.

SIT DOWN AND SHUT UP 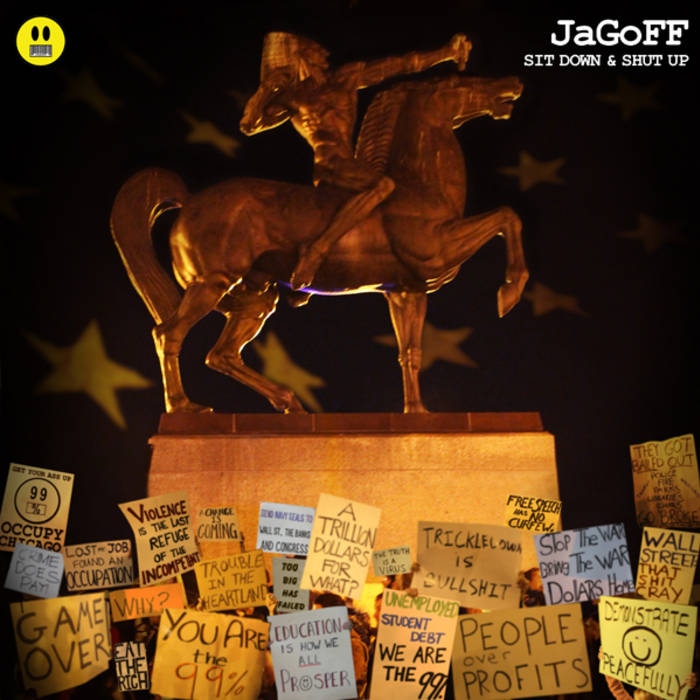 Sit Down & Shut Up is an audio documentary/dance party from the front lines, simply put FROM THE STREET AND FOR THE STREET. The album takes it's name from a Chicago anti-protest ordinance, affectionately known as the "SIT DOWN AND SHUT UP ORDINANCE" aimed at the OCCUPY movement (more info on SDSU check these links out: bit.ly/IrAXOS and/or bit.ly/wnQhD1 ) This audio doc is our humble attempt of following in the great Folkways tradition to speak to a 2012 audience. A global population drowning in disconnect, divisive political leaders, corporate media talking heads, massive foreclosures, a failing educational system, crumbling infrastructure, privatization, SOPA, CISPA, free speech zones, tear gas, flashbangs, rubber bullets & pepper spray.

In late September of 2011, Chicago filmmakers/artist/musicians JaGoFF headed out to document the few dozen folks that had gathered to echo what a few days earlier had begun as a small ripple on Wall Street.

We engaged in conversations across the board, from students saddled with massive debt to single mothers holding down multiple jobs, veterans, teachers, social workers, unemployed construction workers and nurses, etc. Political affiliation did NOT matter. People were finding common ground - pointing to the growing disconnect that Washington and Wall Street had with the rest of the country. It certainly felt like a tipping point.

Within a few weeks, the dozens of folks grew to thousands marching in the streets. Thousands marched, thousands were arrested and thousands more came. Absent from all of this was the "mainstream media", filling the void were citizen journalists photographing, tweeting, recording and live streaming.

As we visited the outcropping of OCCUPY groups across the country, the end result was the same and the messages were as varied as the voices. Corporate money out of politics. Education finance and reform. Eviction moratoriums. Homeless shelters. Health clinic closures. Privatization of public space. Police precinct closures. Putting a end union busting.

These recordings are a snapshot during of the birth of the movement. It probably isn't the first recording of it's kind and we certainly hope that it is not the last.

Out of chaos comes order.

All music written, performed, recorded and produced by JaGoFF & the 99%.

Album Mixed down by JaGoFF.

Spawned from post-industrial Detroit and Chicago's South Side, JaGoFF are fierce independent artist advocates, community organizers, social/political satirists, pranksters, hell-raisers, and all things FUNK. You'll need some big-azz bazooka tubes in the trunk aimed straight at the Musical Industrial Complex to properly tear this up. ... more